Starting today we will do our #ScarsOfStrength stories daily. Each post will be written in the patient’s own words. Please read and share each story. 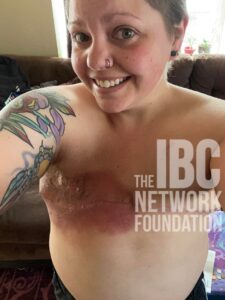 My story started with a lump in my armpit that was painful in October 2019. I just assumed it was bacteria from shaving my armpits or something along those lines and ignored it moving on with life. Fast forward to December of 2019, I still have the lump in my armpit and I start noticing a horrible itch on my right breast. Having sensitive skin this really wasn’t that alarming until one day when I got out of the shower I noticed my breast was so much larger than my left. I noticed my nipple was completely flat. I noticed the skin looked kind of like a orange peel. Now the red flags were raised, I started googling my symptoms and it lead me to IBC. Initially I didn’t believe it was possible for me to have this rare disease. I waited a few days thinking about it and researching. I was finally convinced of my situation. After that I went to my doctor who advised me not to be alarmed. It likely wasn’t cancer due to my age and it looked potentially like a infection. They still set me up with a ultrasound and mammogram a month out from that appointment. My anxiety grew because I didn’t believe I had a month to get started with treatment. After a few days I went back to inform them of the intense pain in my armpit and my growing anxiety about the possibility of cancer my primary care got me a ultrasound/ mammogram same day. After the mammogram the radiologist told me it was just a infection in my breast and that I didn’t need the ultrasound unless I wanted it. I decided I wanted it just to be safe. I felt foolish I had made a big stink about having cancer at this point but I still pushed forward. As soon as the ultrasound started I could tell something was wrong. The tech grew quiet and was taking a lot of images of my breast. The radiologist came in incredibly alarmed and wouldn’t tell me anything. All he told me was I needed a breast MRI as soon as possible for answers. Fortunately 2 days later I was seen by a breast cancer surgeon who officially gave me my diagnosis and biopsied my tumor. From there everything moved very quickly. I had a PET scan the following day to determine it had not spread further than my lymph nodes. The following Monday I had my port put in and starting ACT chemo on 1/13/20. I went through 6 months of chemo, double mastectomy, and 30 rounds of radiation (that I finished TODAY). I feel so lucky to be here today sharing my story. Had I continued to brush symptoms off or not express urgency to my doctors my story would be different. I’m so thankful for the support and knowledge I received from the IBC foundation during my journey. It was so nice to know I wasn’t alone. My goal now is to raise awareness and research to continue to give women the best chance at survival.