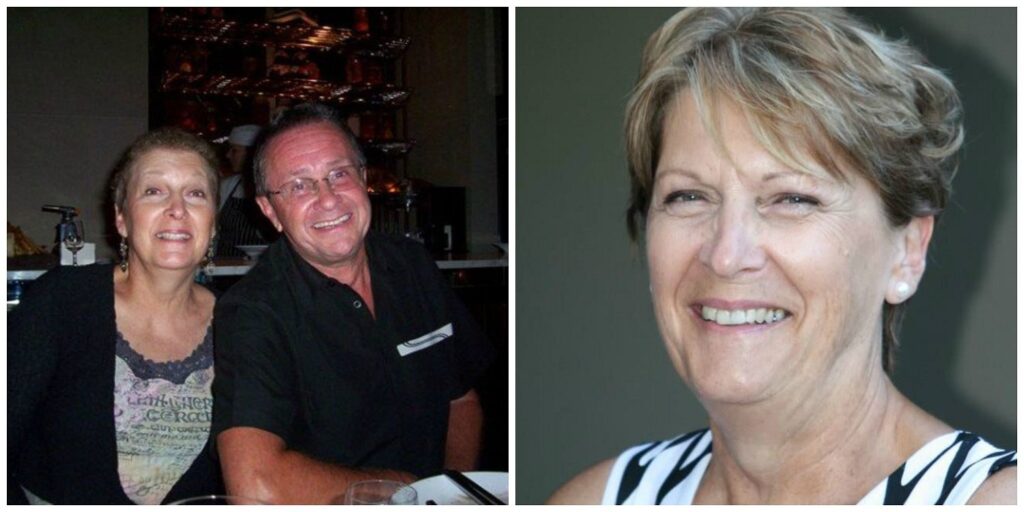 Marilyn with her husband in 2006. Marilyn today, happy to share hope.

Ten years ago I Googled breast cancer on my laptop. I had noticed my left breast had become larger than my right breast for some time, but over the last few weeks it had grown noticeably. In addition, It felt warm to the touch and there were little ridges appearing below my nipple.

I hadn’t been unduly worried, but as I read different websites my heart sank. I hadn’t realized that there was more than one type of breast cancer, and I read with dread about Inflammatory Breast Cancer.

I checked out the symptoms. Swollen breast–Tick, Warm to the touch–Tick, Ridging–Tick, Itchy red patches–No (but I did develop these later). Stabbing pains (again I experienced this later). P’eau d’orange, where the skin resembles orange peel. I lifted my breast to the magnifying mirror and saw – p’eau d’orange! TICK!

In hindsight, I could possibly have picked it up a few weeks earlier. My breast had felt pre-menstrual, however I was 57 years old and had long since experienced menopause. Another symptom passed off as nothing.

I made an appointment with my General Practitioner the next day and told him ‘I think I have Inflammatory Breast Cancer’. He examined me. ‘Hmm….. it looks swollen’ he said ‘but I can’t feel a lump’. ‘I know, I’ve been on the internet’ I said (GP visibly stiffens). ‘I’ve been reading about this thing called Inflammatory Breast Cancer, and I seem to have most of the symptoms – even p’eau d’orange.’  I swear I could see a light went on in his head.  To be fair if one in ten people get breast cancer and IBC is 3-5% of those, then the likelihood of a GP running across many true IBC cases is highly unlikely (and remember this was ten years ago, in rural New Zealand).

To his eternal credit he said ‘Well you are obviously concerned about this so I will give you a letter for a breast specialist. To his eternal discredit the referral letter said ‘Marilyn has been on the internet and she thinks she has Inflammatory Breast Cancer’. Oversensitive? I don’t think so.

I arrive at the private hospital where they subjected me to eight mammograms – six on the swollen breast. Torture! Nothing shows up on the mammograms, so they try Ultrasound. They are confused, since they can pick up a thickening of the breast but nothing else. After imaging, I get sent to the specialist and tell him my story. ‘I think I have Inflammatory Breast Cancer’ I say.  (He still laughs about this by the way – how I came in and told him what I had). He examines me and does a biopsy.

‘I am afraid you are right, you do have IBC, I have seen it a couple of times before. THANK GOD FOR THAT!

The following week was a blur of tests. I had Stage 3 IBC (which is the earliest diagnosis by definition), but I was grateful to find out that my IBC had traveled no further than the breast at that point.

I started chemotherapy at Wellington Hospital the following week, but it took several attempts to find the right one. Such wasted time. After four months they felt the breast had shrunk enough for a mastectomy, but afterwards I was distraught to learn that the cancer hadn’t been destroyed by the chemotherapy. It had traveled through the lymph nodes and they were just about all removed.

I had given up reading the internet. Most info on IBC was on (out of date) American websites and the prognosis for most was grim. I really thought my time was limited. More chemo followed – Docetaxel, Paclitaxel, Carboplatin and the HER2 antibody Herceptin. These treatments certainly took their toll on me – I lost my hair, eyebrows, lashes,  and toenails. The taxane treatments caused peripheral neuropathy that I still have remnants of, ten years later.

However, after this additional chemotherapy they decided I was finally ready for radiotherapy. Radiotherapy was a 200 kilometer (124 mile) round trip every day, and I drove myself there and back in time to work at my boutique for the afternoon. Finally I was cleared, and on 3-monthly check ups with my breast specialist and the Blood and Cancer Unit.

Three years later during one of these visits my specialist found a lump in my remaining breast. A biopsy was taken and a few days later I received the phone call that it was cancer again. I thought God I can’t do this again, but there is no option is there? Plus it was easier this time as they had figured out the right treatment that shrank the tumour, also I didn’t lose my hair again which was huge. I was offered a lumpectomy, but opted for another mastectomy. No radiotherapy was required this time.

Ten years later I still see my specialist every three months, for his and my peace of mind. I have lymphedema in one arm and peripheral neuropathy which is slowly getting better. But I am ALIVE!!

IBC is survivable, but listen to your body, be aware of even the slightest change and don’t be afraid to question the specialists.

Year Of Your Diagnosis:

How You Got Through Treatment:

Advice For Those With IBC:

More Information About You: