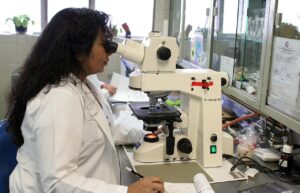 Inflammatory breast cancer (IBC) is the most lethal and aggressive form of breast cancer; it is highly likely to spread to other sites in the body. Although the disease affects only 2-4% of breast cancer patients, it causes an alarmingly disproportionate 10% of breast cancer deaths in the U.S. There is an urgent need to establish novel treatment strategies to reduce IBC recurrence. Among IBC, triple negative breast cancer (TNBC) is the most aggressive subtype. There is no targeted therapy such as hormone therapy or HER2 target therapy which are approved only for hormone receptor positive or HER2 receptor positive breast cancer. One of our group’s efforts is to identify the drugs that can prevent the recurrence after standard chemotherapy, surgery and radiation treatments.

With your generous support, our group has focused on the role of drugs named “statin,” which used commonly for high cholesterol treatment. There are some studies showed that people who were on the statin for cholesterol treatment had a lower risk of recurrence of breast cancer and death after initial breast cancer treatment. Our group provided additional support for this protective effect in 723 primary inflammatory breast cancer (IBC) patients, in whom we showed that use of atorvastatin, a type of statin, at time of initial evaluation in breast clinic was significantly associated with low risk of recurrence of diseases. Also, our group studied this in 519 patients with stage III IBC who had post-operative radiation treatment and found that statin use was associated with decreased locoregional recurrence of the disease.

This finding is supported by some laboratory experiments by using TNBC cancer cells and mice with TNBC. Statin inhibited cancer cells from moving to other sites, which we call “metastasis” as well as from growing.

Our team is investigating whether treatment with a statin after standard chemotherapy, surgery, and radiation in patients with triple-negative inflammatory breast cancer would have decreased the risk of recurrence of a disease. As a first step, we would test the efficacy of stain by looking at a reduced rate of cancer cells flowing in the bloodstream, which we call circulating tumor cells (CTCs). And then as a confirmative study, we would test the efficacy of stain by comparing the risk of recurrence in between patients treated with statin and patients not being treated with a statin.