Carolyn Hall PhD is a highly respected researcher at MD Anderson who is leaving to accept a medical director position and to be near family in Michigan. We want her to know she will be missed and we wish her all the best.

Below is an article about Carolyn that appeared in the Winter 2008 edition of the Torch. The newsletter of the Morgan Welch Inflammatory Breast Cancer Research Program & Clinic at The University of Texas M. D. Anderson Cancer Center. 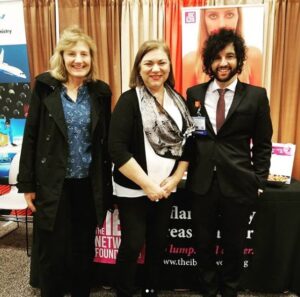 Carolyn (Carol) S. Hall, Ph.D., was diagnosed with inflammatory breast cancer by her medical oncologist at her local Midwestern cancer center in July 2006. After receiving the news, she immediately went to a larger, regional cancer center but the results and response were the same, positive contralateral lymph nodes on the scan and she remembers hearing, “You have Stage 4, IBC, triple negative.” The second institution placed Carol on palliative treatment only.

As a scientist and her own advocate, her personal research into IBC began. She read every piece of literature and all published information on IBC. One name came up over and over again: Massimo Cristofanilli, M.D. She immediately contacted M. D. Anderson Cancer Center and was scheduled with Dr. Cristofanilli.

In August 2006, Carol began the 1,200-mile journey to meet with this man, Massimo Cristofanilli. To her, it was also comforting to know she would have the extraordinary technology of M. D. Anderson available.

After returning home from her second visit to M. D. Anderson, Carol anxiously awaited the test results. Finally the call came! She traveled to Houston and was informed of the results: she did not have IBC but locally advanced breast cancer (LABC) and she was restaged IIIC.

Treatment started immediately. Carol had a phenomenal response to the chemotherapy treatment and due to the extensive nature of her treatment, she temporarily moved to Houston, Texas to be close to M. D. Anderson, have her surgery – a modified radical mastectomy. This was followed by radiation therapy.

Carol’s surgeon, Anthony Lucci, M.D. acknowledged her scientific background and recognized her desire to make a scientific contribution during her stay. He encouraged Carol to visit his lab team. She would often have lunch with the team and talk science.

As the meetings continued, she was offered the honor to contribute to a review article on CTCs. It was through Lucci’s generosity and her participation with this paper that she realized her interest and desire to join the IBC research team at M. D. Anderson.

In March 2008, Hall moved to Houston and accepted a position as research scientist in the laboratories of IBC team members, Lucci and Wendy Woodward, M.D., Ph.D. Carol has developed a close collaboration with Fredika Robertson, Ph.D.

One of Hall’s many challenges is to develop new cell lines from IBC patient samples. She grows and stains mammospheres for examination under a confocal microscope. (Figure 1.) The ultimate goal is to develop individualized therapy. She is passionate about her work and adds, “We will beat this!”

Dr. Hall is quite adamant when she says, “I can assure every woman with an IBC diagnosis, making the trip to M. D. Anderson Cancer Center of the following: in the lab, I will derive as much information as possible from her sample. I am an IBC patient advocate in the laboratory.”

She is reflective on the effects her cancer diagnosis has on her family and children. After a long pensive moment, Hall shares, “I have a lot of empathy for the family sacrifices, emotional and financial hardships experienced with a cancer diagnosis. It is heartbreaking.”

She came to M. D. Anderson Cancer Center for the best available treatment and stayed to work. Hall loves to have the opportunity to contribute and make a difference every single day.